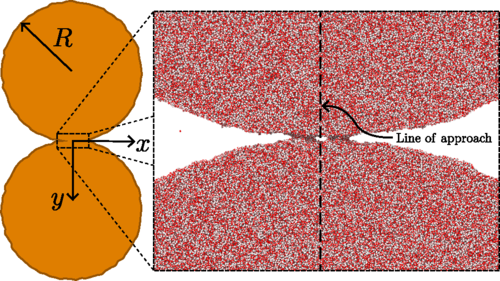 The classical notion of the coalescence of two droplets of the same radius R is that surface tension drives an initially singular flow. In this project we show, using molecular dynamics simulations of coalescing water nanodroplets, that after single or multiple bridges form due to the presence of thermal capillary waves, the bridge growth commences in a thermal regime. Here, the bridges expand linearly in time much faster than the viscous-capillary speed due to collective molecular jumps near the bridge fronts. Transition to the classical hydrodynamic regime only occurs once the bridge radius exceeds a thermal length scale.

This work was performed by Sreehari and produced the following papers: 1 and 2. 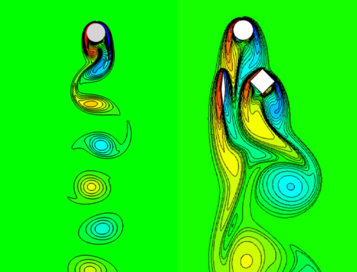 The molecular mean free path (MFP) of gases in confined geometries is numerically evaluated by means of the direct simulation Monte Carlo method and molecular dynamics simulations. Our results show that if calculations take into account not only intermolecular interactions between gas molecules but also collisions between gas molecules and wall atoms, then a space-dependent MFP is obtained. The latter, in turn, permits one to define an effective viscosity of confined gases that also varies spatially. Both the gas MFP and viscosity variation in surface-confined systems have been questioned in the past. In this work, we demonstrate that this effective viscosity derived from our MFP calculations is consistent with those deduced from the linear-response relationship between the shear stress and strain rate using independent nonequilibrium Couette-style simulations as well as the equilibrium Green-Kubo predictions.